So, as was the case with Grand Tetons and Yellowstone we had not been able to book a campsite at Glacier National Park. So we left Bozeman (Ed was in tears) and headed towards Glacier planning to find a motel for the night somewhere close to the edge of the park. That way we would be in a good position to head into the park and nab a walk in campsite first thing the next morning.
We stopped at a Starbucks 75 miles before the park for coffee and wifi signal. We started to surf the usual hotel booking sites for a motel and were somewhat dismayed to discover that there was virtually nothing available within 50 miles of the park. Finally we found a room (seemingly the last one within a 50 mile radius!) in a small town called East Glacier (yes, it’s to the east of Glacier Park!).
We were pleased to have a booking but a little nervous as the on line reviews of the motel were not at all complimentary. As it happens we need not have worried. The motel was under new management and had been completely refurbished. The massive room was spotless, the beds were comfortable and we even had a little terrace where we could enjoy a relaxing glass of wine as the sun set.

Once we were in East Glacier we realised that we could not be in a more ideal spot. The Two Medicine campsite (where we wanted to stay) was literally a ten minute drive away! Ed gallantly volunteered to get up early the next morning and drive into the campsite to try to get a site so the rest of us could snooze on in bed. He left at 6.30am and was back before 8am with the happy news that the campsite was gorgeous and he’d found us a great site.

After a slap up breakfast in East Glacier we all headed to Two Medicine. It is a lovely location – on the side of a lake (yes, you guessed it, great for fishing!) and surrounded by dramatic peaks. We spent the day setting up camp… 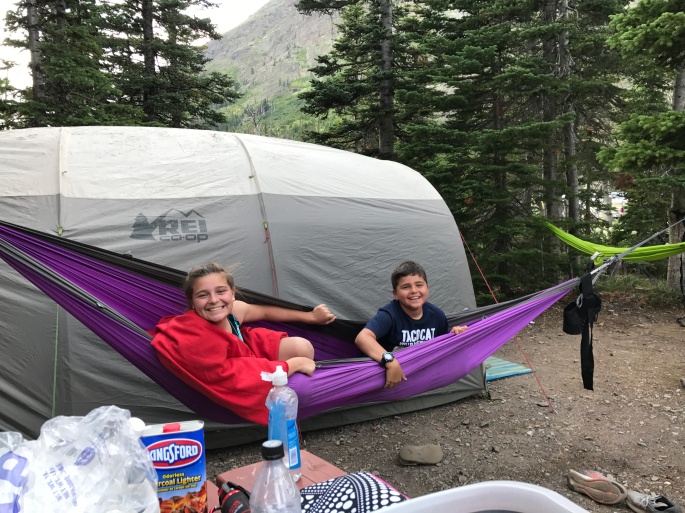 and enjoying a walk around & splashing in the lake…. 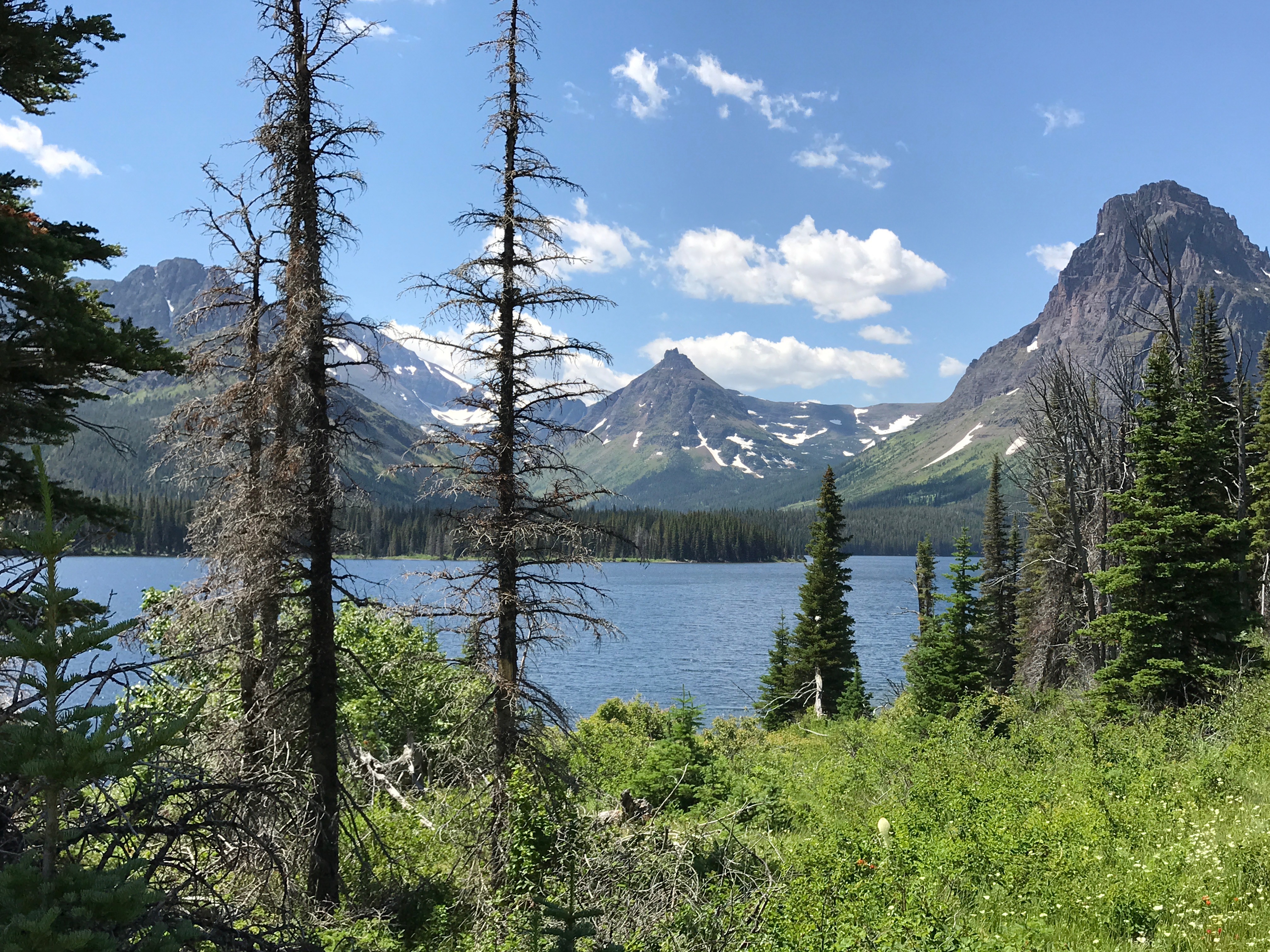 Like Yellowstone, Glacier National Park has a number of different areas which have to be explored by car.

Our first outing was to drive ‘The Road to the Sun’. This is an incredibly scenic drive right across the middle of the park and over the Logan Pass. You take in all the incredible vistas of the alpine scenery. It was quite spectacular.

We drove the 50 miles all the way across to the west side of the park, stopping numerous times to take in and photograph the views. 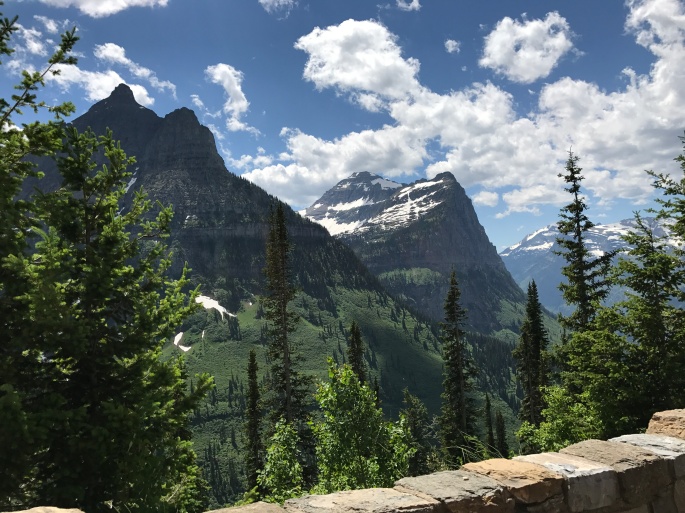 This is the weeping wall – where waterfalls cascade down onto the road – the perfect free car wash!! 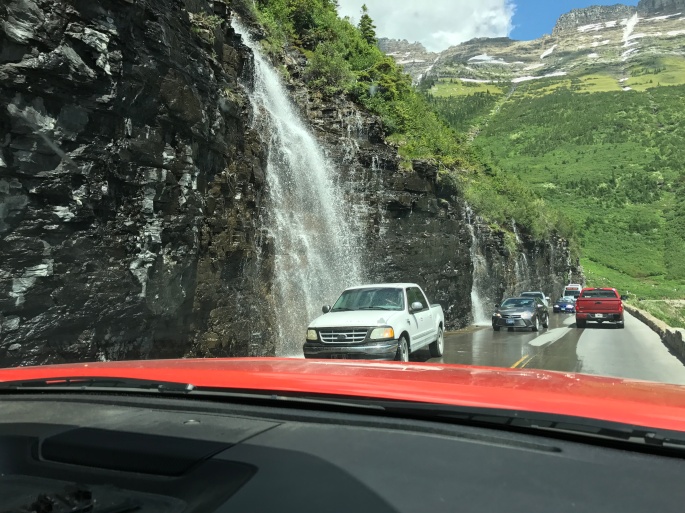 In the distance is a glacier. 100 years ago there were 125 in the park. Now there are just 25 – all the smallest they have ever been..

We arrived at the west side of the park, at a village called Apgar. We were absolutely blown away by the views of MacDonald lake with the mountains in the distance.

So on a whim I popped into the small Inn perched on the side of the lake to enquire if, by chance, they had any availability. And we were in luck – they had a room available 2 nights later. We booked it on the spot! We just wanted to be able to come back and be able to relax for 24 hours in this magnificent setting.

We returned to Two Medicine enjoying views from the Road to the Sun from the other direction.

The next day we explored the Many Glacier area. It was a 90 minute drive north from our campsite but was most certainly worth it! The whole area was stunning with calm lakes and majestic alpine peaks in every direction. We chose to do the 10 mile hike to Iceberg Lake. It was a beautiful walk and we saw a moose and deer on the way. 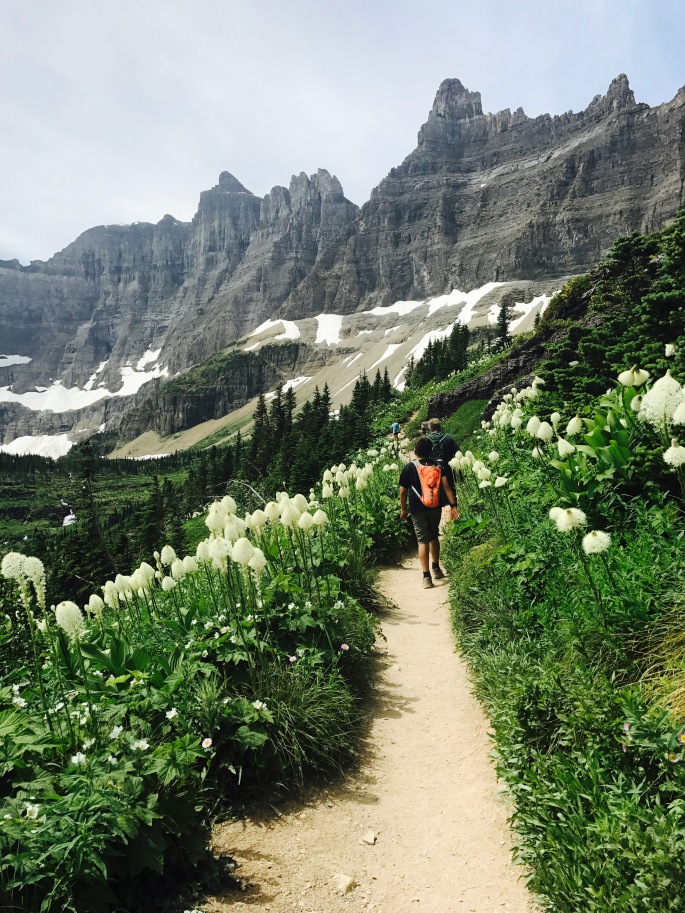 Iceberg Lake did not disappoint – it was fabulous –

and the kids were so excited to be standing on real icebergs! 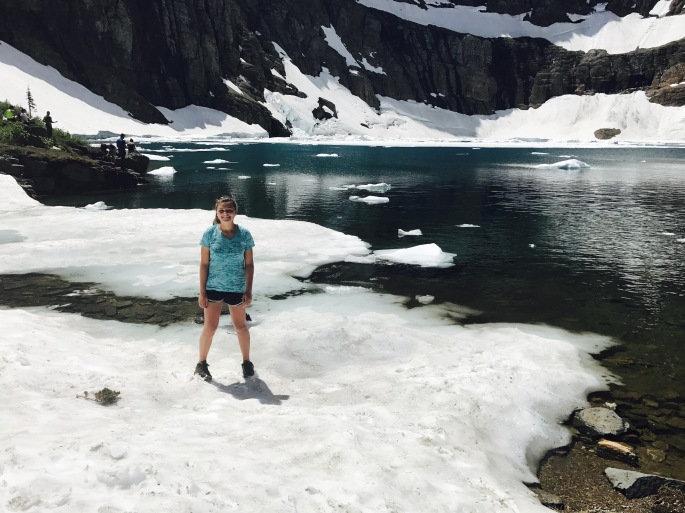 I have no idea how they handled being in such cold water! 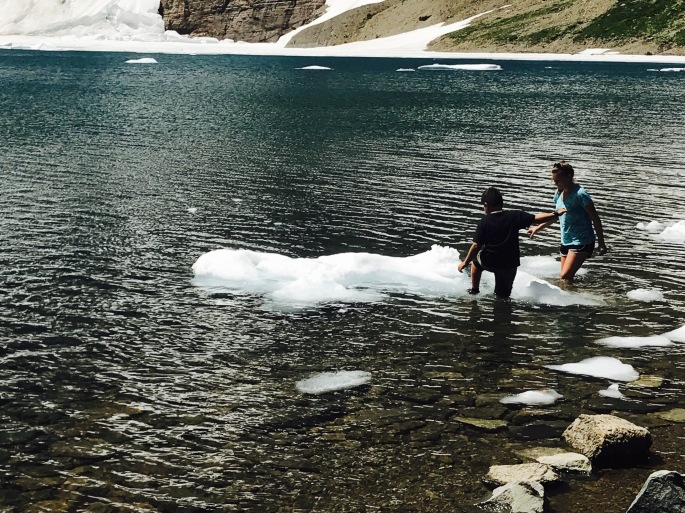 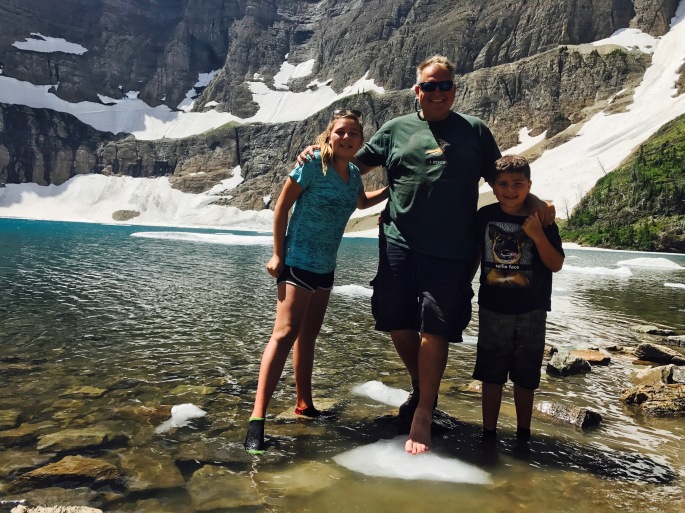 The next day we packed up at Two Medicine and headed back to Apgar (the quick way around this time, around the southern perimeter of the park – it’s further but a far fast road than the Rod to the Sun!).
We were not disappointed. Our room had probably the best view we have ever had from a hotel room.

We were quite literally 20 feet from the edge of the lake. We hired some paddle boards and had some fun! 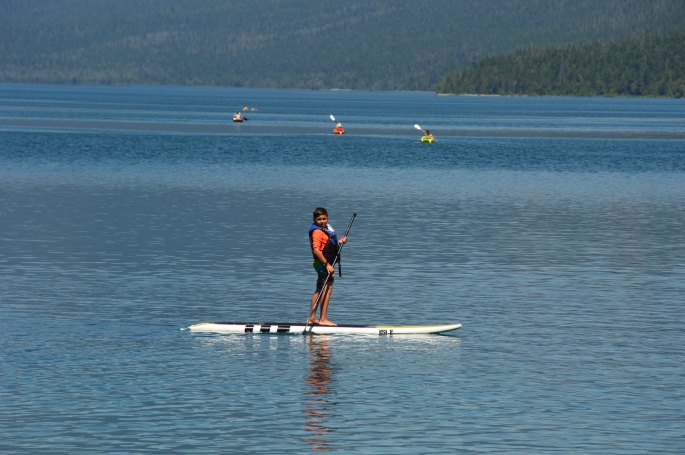 (Note – we have finally found something Ed can’t do – Paddle Boarding! He could not balance the board (blamed the badly twisted ankle he’s been suffering with for a few weeks) and quickly gave up trying!)
To add to how ideal the room was we even had our own little kitchen so we to cooked up a delicious dinner and enjoyed it with knock out views.

We all had an amazing nights’ sleep in spite of the fact that we found out the next morning there had been a magnitude 5.8 earthquake during the night. Apparently the whole building had shook and there had been waves on the lake – family Guyton hadn’t felt a thing!

Then it was time to bid farewell to Glacier National Park – for me probably the most scenic of all the parks we have visited (so far).

What Ed says: There is no question that Glacier National Park has some of the most stunning scenery of all of the parks we have visited to date. The ‘Road to the Sun’ drive is a must: but as the driver, I did not necessarily get to appreciate the drive as much as the passengers, as I was concentrating on not hitting anyone else and staying on the twisting, narrow road!! We discovered too late that there is in fact a solution in the form of a RED Jammer bus. These busses run tours through the park and have been running for years. (They are called Red Jammers because when they first stated running, some 40 years ago, the gear boxes were terrible and would jam all the time! The gear boxes have now been replaced and the Jammers run smoothly!)  They stop in all the main places to take photos and with a roof that comes completely off it means passengers can stand up to take pictures. I believe you would also glean a lot of info from the driver (most of who look like they have been in the job since the Jammers the started running!) so would recommend this much more relaxing way to see and fully appreciate the Road the the Sun.
Two Medicine does have some nice trout fishing however when I was there, the best fishing spot was crowded with teenagers splashing around on lilos. This was kind of irritating but what can you expect in peak season?……ba humbug!….
Fabulous park and will be back…. 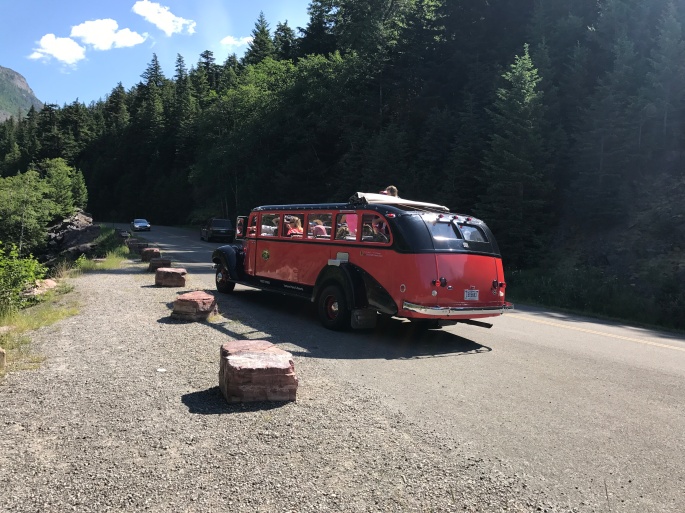 Next destination: The Drive to Seattle, via Coeur d’Alene, Idaho.